Group sales up 15.3% – on track to be in line with full year expectations

I had a quick look-see at them yesterday, figured that the results would probably be good, but too risky to buy at their price and debt levels. Here’s the chart over the last year: 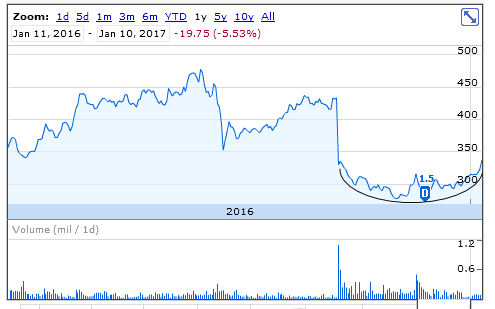 There was a nasty gap down at the end of September 2016. That’s your cue to head for the exits. The chart gets interesting after that. The company released half-year results in mid-November, causing a spike in the share price.

Notice the nice bowl in the charts as, although the share price wobbled a bit after the announcement, you can see a positive trend returning.

Let me make the bull case on this. WINE said that they were still on track for their target of £500m revenue by 2019. Let’s suppose that they can make net income to revenue of 6%. That’s more like their longer-term average, than recent figures. So we might expect net income of £30m. Let’s put on a reasonable multiple of 15 for that. So you’ve got a company worth £450m against its current market cap of £226m.

Not bad at all. There are plenty of assumptions in this calculation, so feel free to believe, disbelieve or adjust according to taste.

I decided to have a dabble.

Update 10-Jan-2017: I want to emphasise that I took just a small position here. There is no certainty that I made the right call. There is a reasonable bear case for this share, too.

For a  glass-half-empty view on WINE, if you’ll forgive the pun, Paul did a write-up on Stockopedia today.