Stockopedia gives its dividend yield as 8.2%: a near-certain sign that the dividend is vulnerable. Sure enough, the company announced that it is withdrawing the interim dividend today, and indicated that a full-year dividend is unlikely.

The company is in Neil Woodford’s portfolio, who had this to say:

I believe Provident Financial shares started the day undervalued, and have become even more so as a result of the market’s reaction to today’s news. I am hugely disappointed by what has happened to the consumer credit division but I continue to believe that it will, ultimately get back on track (this business has been around for more than a century, by the way, and I believe it will be around for many decades to come).

Stockopedia gives it a Value rank of 73, which is good, but not exceptional. The Momentum rank is 7. I regard that as a warning of terrible things happening, as opposed to merely being weak.

The company qualifies for two Dividend Dog screens. However, given today’s news, those classifications are erroneous.

The chart was giving plenty of warning of the impending disaster, too: 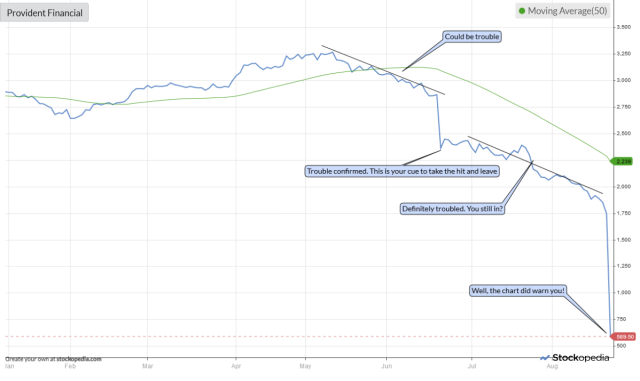 Stockopedia gives a PBV of the company as 3.5, which is way above industry average. On another site, I have seen the PBV to be a little over 1. So it’s probable that Stockpedia has not yet updated its PBV figures.

A PBV of 3.5 is quite racy for a financial services company. LLOY is trading on a PBV at just under 1, for example, with RBS at about 0.7, HSBA at 1, STAN at 0.7. Some of those will be paying dividends, too, which is now more than can be said for PFG.

67% is quite a drop for such a large company. I imagine with such a large gap down it has to make some kind of rebound above 600p some time in the next 6 months. I am not making a prediction as to whether the share price will be higher or lower in 6 months time, though.

Let’s follow this up in 6 months and see what has happened. Stay safe!

Selling on the first profit warning is usually the best course of action … there were clear signs in Jun 2017 that something was going badly wrong … the FCA seem to be looking much more closely at businesses like this, which essentially rip-off the poorest consumers … Big dividend yields are often a signal from the market that something is going wrong

I think this share is probably too risky to have a punt on now, without doing a lot more research.