Recently I decided to buy the “Elegoo UNO Project Basic Starter Kit with Tutorial and UNO R3 for Arduino” from Amazon. It cost £13.99.

For those who may be unaware, the small board electronics niche has two undisputed leaders: the Arduino, and the RPi (Raspberry Pi). The Arduino is a microcontroller board, whilst the RPi is a microcomputer board. The Arduino can be used for electronic projects, i.e. controlling electrical circuitry, whilst the RPi is basically a complete computer with which you can also create electronic projects. The Arduino costs £28, and the RPi3 costs a fraction more, at £32. Given the sheer scope of what you can do with the RPi, the advantage generally lies with the RPi, at least in my opinion.

Although the Arduino is quite expensive considering, it is an open hardware platform, and there are plenty of clones out there. One very popular one is produced by Elegoo. Elegoo is designed and produced in China, which is often a bit of a warning sign.

However, the Arduino comes as just a basic microcontroller on a board, whilst the kit I purchased is half the price of that, and comes with leads, a breadboard, resisters, LEDs, pushbuttons, a tilt detector and photometer and a CD explaining how to use the kit.

Being Chinese, the quality is not up to the standards set by Western companies. I inserted a lead in the breadboard, for example, and when I came to remove it, the lead’s pin broke free and remained stuck in the breadboard. So I had to remove the pin manually.

Despite these glitches, the kit worked well otherwise.

The instruction manuals that come with the Elegoos are often derided. However, I found the CD to be well-written and informative. They appear to have been written by someone for whom English was a native language. I felt that the instructions were close to the standard that you would find in, say a CamJam EduKit. So don’t dismiss the manuals, as I found them educational. Use them!

Would I recommend this kit? Despite my seemingly somewhat negative previous comments, I would say “definitely yes“. The price is unbeatable, you get bits an bobs to play with, a set of instructions. This makes it an ideal introduction to electronics.

Remember, an Elegoo is a clone of the  Arduino UNO, so it can do eveything an Arduino can do, in exactly the same way. Throw in a selection of components and an instruction manual at half the price of a bare board, and what’s not to like? 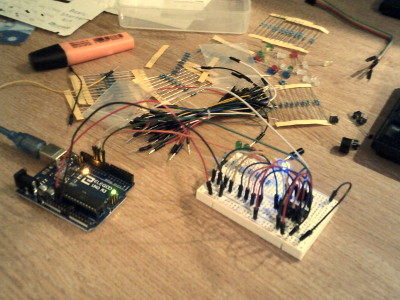 Lots of blinkenlights going with the basic starter kit